What other Author/Instructors have to say about the Break Shot. 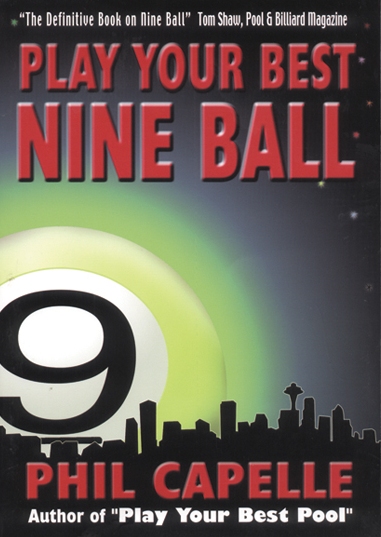 Breaking a rack of Nine-Ball is sort of like a golfer’s Putting or a basketball player’s Jump Shot; sometimes you’ve got it & sometimes you don’t.

The Pros work on their Break as much as any other single shot and yet, as examples demonstrate, their results in this crucial area of performance are highly inconsistent. This is due to changing conditions & minor fluctuations in their techniques. In the final analysis, you’ve got to perfect your Break, so you can wring as much from the table as you can.

LAW: the greater the ability of the players, the more of a role the break plays in determining the outcome of the match and vice versa.

Karin Kaltofen, then the editor of the magazine (Pool & Billiard Magazine), & engineer Steve Kasten measured the speed of the break shots of over 300 hundred amateurs & professionals using his “Laser Speed Meter”. The 23 male pros averaged 24.9 MPH while the 15 women pros averaged 19.3 MPH. The most fundamental conclusion of the study was that high-speed hits, with accuracy, do produce more balls on the break. Imagine that!

The test also revealed that going all out, for speed, creates a big variable in your results. A controlled, yet powerful break speed gives you consistency. Once you have come close to mastering the fundamental techniques of the Power Break, you will probably be within 1-2 MPH of the maximum you could ever hope to achieve. From that point forward, incremental improvement will come only from focusing extensively on a training regimen designed to enable you to reach your absolute maximum, period.

The Break Shot is the most crucial shot for the pros, when you consider they break & run 28% of the time. Even though the break is less important for amateurs, it can still provide you with the winning edge.  B players & above should be looking to accomplish the following objectives;  1. Make at least one ball    2. Have the balls spread in such a way that the rack can be run  3. Have a reasonable makeable shot on the lowest numbered ball  4. Park the Cue Ball in the center of the table.

A less than perfect hit on the Cue Ball and/or the One Ball can cause you to lose control of the Cue Ball. Want to be a consistent winner at Eight Ball or Nine Ball? Then you*ve got to have a crushing Break. Players who can splatter the balls all over the table, without losing control of the Cue ball, have a big advantage; very often they can run out the game without giving their opponents a chance.

You don*t have to be a big brute to break the balls effectively. More important than bulging muscles is proper technique*..

The break is the single most important shot in the game. It is pool’s equivalent of the first serve in tennis, the tee shot in golf. A good break gives you the opportunity to run racks. Top pros consistently run out from the break, and on occasion, string several racks together. As you evolve as a 9-Ball player, you will need to move past the one rack mentality, that is, you will need to visualize yourself as a player capable of running several racks. A powerful Break Shot is a necessary element of this transition.  A good Break Shot will, among other things, boost your confidence. Each time you approach a Break Shot, eager to watch the balls flying in all directions, you will know there’s a good chance a runout-table will result. A powerful Break can intimidate your opponent.  A commanding Break can also help you come back from a deficit. At the tour level, many contests are decided on the basis of who is breaking better at that moment.

The break in 9-Ball is probably the biggest single advantage you can have in any Pool Game. It is all-important. You can lose a game of Nine-Ball without ever leaving your Chair.  The Nine-Ball break is very important for more reasons than just giving you an opportunity to run out. On nearly every occasion, you can control the tempo of the game from the break. If you don’t have a shot at the 1-Ball (or lowest numbered ball, if the 1-ball went in on the break shot) or you can see that attaining position on the 2-ball is going to be difficult, you can push out or play safe. You set the tone for the entire game when you break. When your ability on the table reaches a certain level of competence, the Break Shot becomes one of the most important shots, if not the most important shot in your arsenal. Games & matches are won & lost all the time on the break, especially in the professional arena. All too often, players treat the break shot like a pre-game shot, not giving it the attention it deserves. Armed with the knowledge included in this chapter, you will come to understand the importance of a solid break, and never take it for granted in your game.

Power Break shots – Most Players don`t practice Break Shots, because it takes too much time to repeatedly rack the balls.